According to the police, the incident was reported around 3.30 pm after members of Bajrang Dal Haryana unit gathered in Faridabad sector's 35 and marched to Crown Interiorz mall, where the film was being screened on the third floor.

The Faridabad police have arrested the accused who had tried to unlock the strong room and after several unsuccessful attempts made away with the manager's phone.

Forest department officials said a call was received about a leopard entering a house in the colony around 11 am.

Car hit by truck, dragged for 50 metres, 1 dead in Faridabad

The victims were on their way from Gurgaon to Faridabad when the truck hit them and the car turned turtle and was dragged on the road. The truck driver managed to flee. As per the FIR, complainant Manan Kapoor (22) said he works at a private firm and was with the victim, Harpal Singh (32).

Promised work from home jobs, 1,700 people from across the country duped by bogus call centre

Faridabad police arrested two members of an inter-state gang and seized 14 phones, 13 SIM cards and Rs 64,000 cash from them.

Police said the body bore multiple injuries on the neck, head, and face. The girl’s family also identified the accused and alleged that they used to stay as tenants at his house.

Parents of children would be lured to let their children, aged 9 to 15, join the gang with an annual payment of Rs 10 to 12 lakh.

The 16-year-old died by suicide on February 24, 2022, with his mother – a teacher at the same school – alleging that he was harassed over his sexuality and the school ignored her complaint.

The remains seem to be around two months old and it is not yet clear if the body was that of a man or a woman, Deputy Commissioner of Police (Faridabad NIT) said. 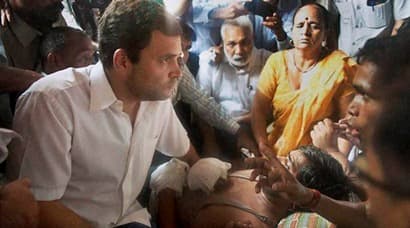 Protest and politics over Dalit killing in Faridabad

Sanped in Haryana’s Faridabad, where a dalit family was burnt alive leading to the death of two toddlers, today erupted in grief and indignation, with the locals blocking Delhi-Agra highway with their bodies in protest as politicians joined them in mourning the horrific killings.

Delhi-Haryana Border, Feb 21 (ANI): The security forces on Sunday used tear gas shells to disperse protestors at the Munak Canal on the Delhi-Haryana border amid the ongoing pro-reservation protest by the Jat community. The security personnel deployed on the site are trying to remove the agitators, who are protesting from the last seven days. The Jat protestors have also blocked NH 8 near Jaisinghpur Khera of Rewari district. Meanwhile, the police baton charged the protestors, who have blocked the NH 2 in Faridabad. At least 10 people have been killed and 150 injured as protests by the Jat community in Haryana demanding status for Other Backward Classes (OBC) continued for the seventh day.