Siddhartha Mukherjee: We are creating people who, in old technologies, will be called cyborgs

Giving the example of artificial pancreas in the making, people who undergo neural stimulation to alleviate symptoms of diseases such as depression, and of Louise Brown, the first child conceived in a petri dish, Mukherjee said, “We might as well be creating what in science fiction is a cyborg.”

Physician and author, Dr Siddhartha Mukherjee, 52, will be the guest at the Express Adda on Monday. He will be in conversation with Anant Goenka, Executive Director, The Indian Express Group, and DevyaniOnial, National Features Editor.

Bhupender Yadav at Express Adda: 'Climate justice doesn’t mean that you let the world be in darkness'

At a recent Adda in Delhi, Bhupender Yadav, Minister of Environment, Forests & Climate Change and Labour & Employment, spoke about sustainable consumption and COP27, the clearance given to GM mustard, and why development and environment are not opposed to each other

At the latest edition of the Express Adda in Delhi, Chief Economic Advisor V Anantha Nageswaran spoke on post-pandemic recovery in the domestic economy, weaponisation of currencies and risks to the economy.

Mansukh Mandaviya at Express Adda: No poor person should die in this country for lack of treatment

At the latest edition of Express Adda, Union Health Minister Mansukh Mandaviya spoke on behind-the-scenes of India’s mammoth vaccine drive, preventive health modules and how the digital health mission can make treatment both accessible and affordable.

Talk about correction in inflated showbiz salaries is growing louder. A valuable conversation has begun

The film business has always been risky. But showbiz has unarguably grown riskier over the last couple of decades, with actors taking up an ever-growing proportion of a film’s budget — upto 50 per cent, in some cases.

Alia Bhatt agrees stars' salaries should be 'reassessed' after flops, notes some actors 'give their money back' after film fails

Alia Bhatt is currently looking forward to the release of Darlings, which also marks her debut as a producer. Alia's production house Eternal Sunshine is co-producing the movie with superstar Shah Rukh Khan's Red Chillies Entertainment.

Alia Bhatt at Express Adda: 'Love it when people think I am dumb'

Bollywood star Alia Bhatt, who is turning a producer with her maiden production venture Darlings, speaks about her career choices and upcoming projects in a conversation with Express Adda.

Sir Mark Tully, former Delhi bureau chief for BBC, was the guest at Express Adda on Saturday. The venerated journalist expressed his opinions on the contemporary socio-political paradigm in the country. The Dalai Lama at Express Adda 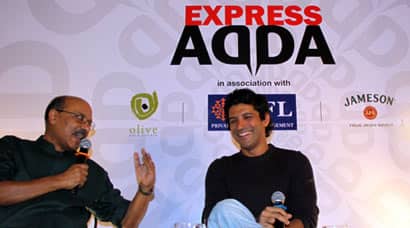 Bollywood actor, director Farhan Akhtar, who has bagged almost all Best Actor awards this season for his power packed performance as Milkha Singh in biopic 'Bhaag Milkha Bhaag', was in conversation with Indian Express Group Editor Shekhar Gupta at Express Adda in Mumbai on Monday (February 4).

In this edition of The Express Adda, Dr. Mukherjee spoke about the questions that drive him to excellence and helped us with answers to the deepest mysteries of life.