Olmert will become the first Israeli head of government to be imprisoned.

The court had convicted Olmert in March of illegally receiving, using and concealing at least USD 153,950 funds in envelopes from New York businessman Talansky between 1993 and 2002.

Olmert spoke in court reiterating his denial of the allegations regarding his role in the affair. 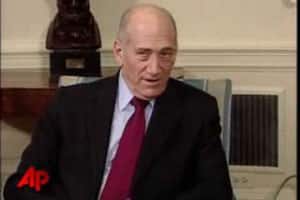 Former Israeli PM to be charged in property scandal

Ehud Olmert will be indicted along with 18 other suspects for allegedly taking bribes. Israeli warplanes returned to the attack on the Gaza Strip before first light as leaders of the Jewish state weighed a unilateral ceasefire. France and Egypt announced an initiative to stop the fighting in Gaza,hours after Israeli mortar shells exploded near a UN school sheltering hundreds of civilians.