These are among the 12 popular legends,one each from 12 districts,which will hard sell Himachal Pradeshs rural tourism. 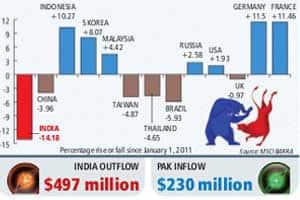 More FII money to Pak than to India

Whether Dalal Street likes it or not,India is now the worst-performing market in the world.

According to the latest World Investment Report from the UN Conference on Trade and Development,General Electric holds foreign assets worth $401 billion....

Nouveau riche in tribals are the new oppressors

The nouveau riche in the community have become the new oppressors,the former rulers of central Gujarat said at a seminar discussing the socio-economic conditions of the tribals,on Thursday.

After having registered a significantly high growth rate of 8.6 per cent in 2007-2008  a year that witnessed Assembly elections and Bharatiya Janata Partys return to power...

Geithner to visit India in April

US Treasury Secretary Geithner to visit India to launch an economic and financial partnership.

New Delhi, Jan 22 (ANI): Petroleum Minister Dharmendra Pradhan has said that with the global economic situation currently at a critical phase, it is imperative that India and Africa forge deeper collaboration, particularly in the field of energy. Indian refiners boosted imports of African crude oil in 2015 to the highest in at least five years and slightly cut their intake from America as refiners benefited from changing global oil flows caused by surplus supply. Pradhan said the Government has decided to diversify energy basket. Pradhan added that the new discoveries in Africa have seen oil reserves grow by over 100 percent and gas reserves grow by over 55 percent and this would improve Africa's position as an exporter of not only oil but also gas. India, the world's fourth-biggest oil consumer, raised its imports of African oil as the continent's mainly light, sweet crudes helped fill increasing demand for gasoline and diesel fuel.