"One of the songs that the children are loving at the moment is Shakira, 'Waka Waka'," said the Duke of Cambridge

"I don't want to give [my kids] the burden of [climate change] worry," he said

Combine technology and innovation with a timeless goal of safe and innocent early years: Prince William

There is a need to raise awareness against cyberbullying, Prince William said.

Prince William declares the 2020s as a 'Decade of Action': All you need to know

Kensington Palace said that the Duke of Cambridge wanted to dispel the current pessimism around the environment and "replace it with fresh optimism and action."

Prince William spoke to about 100 people including Muslim leaders and Prime Minister Jacinda Ardern at the Al Noor mosque. He said the message after the attacks was clear: That hate would fail to divide people.

The actress on the Duke of Cambridge: He was so great backstage – so lovely. He was very easy, very relaxed.

For the first time pictures of the six-month-old Prince George have been published since his christening last October. William's admission came during a visit to the Gardens by the Bay attraction in Singapore.

Kate Middleton to be Duchess of Cambridge

Queen Elizabeth conferred the Dukedom on Prince William of Wales. Kate Middleton looked regal in a golden Alexander McQueen lace dress for a garden party at Buckingham Palace in London on Tuesday (June 10). 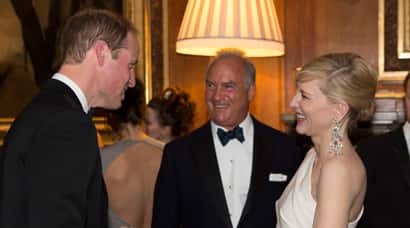 Prince William hosted a dinner at Windsor Castle to celebrate work of The Royal Marsden Hospital.