NGOs have been asked to interact with the homeless and get them to use night shelter facilities.

In all,359 vehicles were checked by the Chandigarh police at ninety nakas across the city.

8,000 men in khaki to keep a hawks eye on New Year revellers

Social networking sites too under watch: 1.30 am deadline for partying

Too drunk to drive? Call a driver

To cope with increasing cases of drink driving,a cab service was launched in the city last year.

Drink driving: Accused made to stand till rising of the court

A local court on Thursday made a city resident stand till rising of the court as a punishment for drink driving.

Now,Mohali resident made to stand till rising of the court for drink driving

The court suspended Gursharan Singh's driving licence for a month and inposed a fine of Rs 3,000 on him.

The Swiss ambassador to the OECD was arrested in Paris for drunk driving after a high-speed chase in which police shot out one of the tyres on his car,a police source said today.

After showing the person a delayed reaction,the mirror flashes up messages about drink-driving. 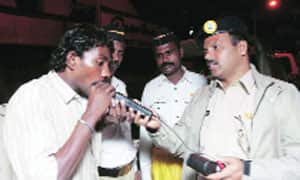 Drink driving non-cognisable offence or not? HC to decide

The powers of the police to act against drunk drivers are mired in a battle of technicalities. Campaign against drink-driving off the track as cases rise

A month after two fatal accidents involving inebriated drivers forced the Mumbai Traffic Police to introspect on the effectiveness of its campaign against drink-driving,there has been no decline in the number of cases registered in the city.