Diana Hayden: Being brown skinned, I've had to fight the 'light skin is better' issue

Diana Hayden, the former Miss World has slammed the thought that 'light skin is better', and said she is proud of her exotic brown skin colour.

Diana Hayden lashes out at Tripura CM: 'Shame on him, proud of my beautiful brown skin'

Hayden said it is ironical that she should be criticised for spreading "appreciation of our Indian brown exotic beauty".

Diana Hayden on her Bigg Boss stint in 2008: The best was that my Hindi improved tremendously

In this interview, Diana Hayden talks about how she froze her eggs three years back, her career as an actor, and why beauty pageant winners aspire to become Bollywood actors.

It's commendable that Diana Hayden has come forward to talk about egg freezing: Dr. Nandita Palshetkar

Diana's wedding was a 3-day affair complete with a rehearsal dinner.

Beauty and the Best

The Art Of Grooming for Woman at Crossword book store,Amanora Town Centre on July 28. 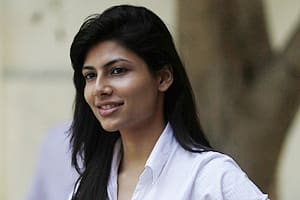 The 19-year-old,who hails from Chandigarh,said she always has the dream of returning the crown to India.