The actor's team has confirmed that Dev Patel and his friends, after trying to stop the fight, waited until the police and ambulance arrived.

Top 10 films of 2021 that you probably didn't watch (but absolutely should): Geeli Pucchi to Nicolas Cage-starrer Pig

From a sprawling period drama to hidden Indian gems, a Zoom movie to a bonkers medieval fantasy; here are the top 10 underrated films of 2021 and where to watch them.

Amazon Prime Video has also planned international titles for the festive season, beginning with the documentary Justin Bieber: Our World. The streamer will also release Dev Patel-starrer The Green Knight.

The Green Knight trailer: Dev Patel goes on a unique quest in this retelling of the fantastical Arthurian tale, watch

The film, which stars Dev Patel in the titular role, is based on the 1850 literary classic David Copperfield by Charles Dickens.

Dev Patel: David Copperfield's casting made the story more representative of a Britain I grew up in

Dev Patel plays the title role in The Personal History of David Copperfield, which is slated to open in theatres on August 28 in the US and Canada.

Dev Patel on The Personal History of David Copperfield: It’s a coming of age journey

Starring Dev Patel, Peter Capaldi, Tilda Swinton, Hugh Laurie, among others, The Personal History of David Copperfield has been directed by Armando Iannucci.

Dev Patel will narrate a National Geographic special titled India From Above. It is a two-part documentary which uses drone footage to show aerial views of towering temples, religious gatherings, EDM festivals and solar technology.

India from Above, which airs on August 14 and 15, will explore the stories of modern India's unique connection with its mystic roots and showcase the country's natural wonders.

10 pictures of Dev Patel you should just not miss today

We just cannot get over how good looking Dev Patel is. What about you?

The excitement to watch Justice League has reached the zenith.The film will mark the coming of all the superheroes of DC Comics in one film. Superman is expected to return in this franchise of the film.

For obvious reasons, the two girls of Bollywood, Priyanka Chopra and Deepika Padukone were talked about the most, but Dev Patel has been more than adorable this year. 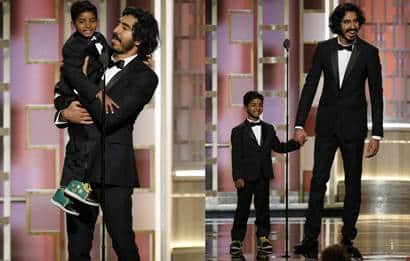 Remember little Latika from Slumdog Millionaire? You will be stunned by how she looks now

Young Latika from Slumdog Millionaire is all grown up and Bollywood's undiscovered gold. Check out her pictures.