The celebrations also included processions by community groups of Gujarat and Maharashtra, with saifee scouts and a musical treat from around 25 bands.

In June 2014, Khuzaima Qutubuddin had filed a suit in the High Court, seeking to be declared as the 53rd Da’i-al-Mutlaq of the community.

PM Modi praised the Bohra community for being honest, disciplined and law-abiding and not resorting to deceit while augmenting trade, its main occupation.

Followers of Qutbuddin have now been asked to attend final prayers for him before his burial procession in Thane on Sunday.

Anandiben Patel met the chief religious leader of the community on Thursday and gave them the news of the solution being brought about.

Others who refused the awards were Baba Ramdev, Sri Sri Ravishankar and Salim Khan.

Officials from the Dai’s public relations office refused to come on record and did not reply to a detailed questionnaire sent to them via e-mail.

The message turned out to be a rumour, but led to confusion and ultimately the stampede, which claimed 18 lives and left 60 injured early on Saturday.

Over a lakh pray for Syedna, visit grave

Most of those who died in the stampede buried the same day. 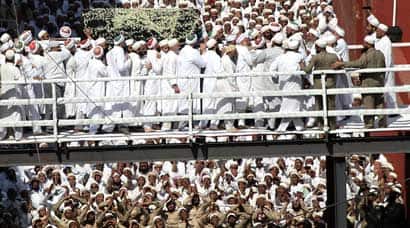 18 killed, over 40 injured in stampede, Syedna laid to rest

Thousands of mourners converged to pay their last respects to Syedna Burhanuddin.