The award ceremony was held after two years due to the pandemic, and these awards, announced in March this year, were for films released in 2019.

Explained: Who was Dadasaheb Phalke, after whom Indian cinema's highest honour is named?

The Dadasaheb Phalke Award is part of the National Film Awards, themselves a highly coveted collection of honours in the film industry.

Awarded the “Best Fashion Designer of The Year” at the Dadasaheb Phalke Excellence Awards 2018 held in Mumbai on Saturday, Sanjukta Dutta from Nagaon speaks about the resurgence of the indigenous Assamese silk industry.

Veteran Bollywood actor-filmmaker Manoj Kumar is working on his next directorial venture which would be based on Aryabhata.

The event was moderated by noted actor and Kapoor’s nephew Rishi Kapoor. Shashi Kapoor is wheelchair bound and has been ailing from kidney problems.

Shashi Kapoor was bestowed with the Dada Saheb Phalke Award by the Union Information and Broadcasting Minister Arun Jaitley.

Shashi Kapoor is the third from his family to get the award, after father Prithvi Raj Kapoor and elder brother Raj Kapoor.

From Phalke peak, Gulzar looks back at journey

Gulzar said although there was lot of nostalgia, 'it was not right to live in nostalgia' and one has to change with time. 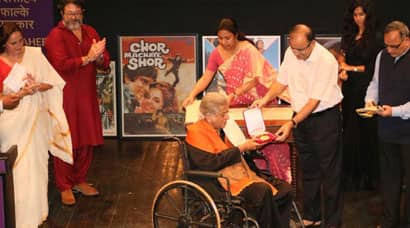 Shashi Kapoor received Dada Saheb Phalke Award on Sunday (May 10) at the Prithvi Theatre. He was dressed in black kurta pyjama with orange scarf. Veteran actor-producer Shashi kapoor has been named for the prestigious Dada Saheb Phalke Award. Here is a glimpse of his journey in Bollywood.