Living conditions in Cuba under Communist rule have long been precarious, but today, deepening poverty and hopelessness have set off the largest exodus from the Caribbean island nation since Fidel Castro rose to power over a half-century ago.

Cubans protest in Havana for second night over lack of power

A foreign monitoring group reported that Cuba's internet service shut down for the second time in two days, saying it appeared to be unrelated to problems from the storm but rather an attempt to keep information about the demonstrations from spreading.

The hurricane comes as Cuba continues to recover from one of the worst periods of financial hardship in the country’s history, with the nation’s ailing infrastructure already producing widespread power blackouts

Millions in Florida urged to evacuate as Hurricane Ian nears

Ian churned across the southeastern edge of the Gulf of Mexico headed for Florida after slamming into Cuba earlier in the day, leaving the entire country without power, forcing mass evacuations and swamping fishing villages.

The US National Hurricane Centre said the island's west coast could see as much as 14 feet (4.3 metres) of storm surge.

The reforms had met unusually strong open resistance from the growing evangelical movement in Cuba.

A natural gas leak was the apparent cause of Friday's blast at the 96-room hotel.

The blast shrouded the building and surrounding streets in plumes of black smoke and dust rising from the rubble.

In pics: Hurricane Ian hurtles through Cuba, with Florida in its sights

A quarter of the city's roughly 2 million people were without power Monday afternoon and more than 200,000 people had lost water service because of a broken main and power cuts that left pumps out of service

Cuba after the Castros: A look at legacy and challenges ahead

The Cuban government on Wednesday selected 57-year-old First Vice President Miguel Mario Diaz-Canel Bermudez as the sole candidate to succeed Raul Castro. It is the first time in almost sixty years that a Castro will not be the president of Cuba. 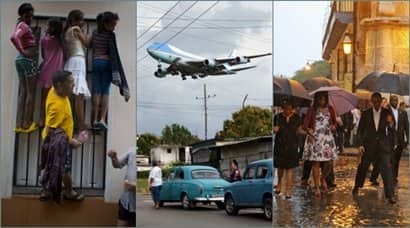 President Barack Obama arrived to small but cheering crowds on Sunday at the start of a historic three-day visit to Cuba.