According to police, an FIR was filed at Chandkheda police station after the four allegedly held a poll campaign outside Booth number 4 -BS High School under Chandkheda ward on Sunday afternoon, while election was under way.

In Ahmedabad, over a dozen Gujarat Congress workers, including Gujarat Pradesh Congress Committee (GPCC) president Amit Chavda, were detained by the police on Friday morning, when they staged a sit-in near Gandhi Ashram in Sabarmati of Ahmedabad.

The decision to allot her a plot in suburban Andheri for Natyvihar Kala Kendra, reportedly for as little as Rs 70,000, has triggered a controversy.

Gandhi asked party workers to put up a stiff fight in the elections.

Congress workers staged the 'rail roko' from 10 AM and 11 AM.

“There were two vehicles, they snatched our posters and other material,” added Deepak Jain, another AAP worker.

FIR against Kumar Vishwas for staging dharna inside police station

FIR was lodged on Friday at Gauriganj police station against Vishwas and others by the administration under section 188 of the CrPC, 353 of the IPC and violation of the model code of conduct.

Outside most polling booths, AAP and BJP workers had set up tables and were seen helping out voters.

The mob of protesters could be controlled only after police arrived and arrested about 18 of them.

The police rushed to the spot and tried to pacify the warring groups, but after failing to do so fired in the air. 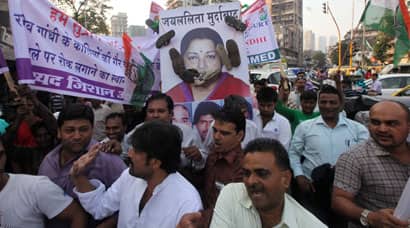 Hundreds of Congress workers held a demonstration in front of their party office.