Hagel in Baghdad to meet with Iraqi officials

US wants to help Iraq regain the territory it lost to Islamic State militants.

Hagel was planning to call his new Indian counterpart this week.

Trail of nuclear woes began at North Dakota base

Minot Air Force Base has had its share, and then some, of bad publicity about nuclear weapons foul-ups.

The focus has shifted from the nuclear liability act and trade issues to Javelin missiles and Apache helicopters.

The M-777 howitzers developed by BAE Systems were originally to be procured at about USD 650 million.

Hagel was addressing a select gathering of decision makers and strategists organised by ORF.

‘Vital stakes’ in Iraq: PM to US

‘Vital stakes’ in Iraq, PM Modi expresses concern to US

Modi is expected to travel to Washington towards next month end for his first summit meeting with Obama.

Defence establishment has turned insular. It needs to reinstate value of diplomacy. 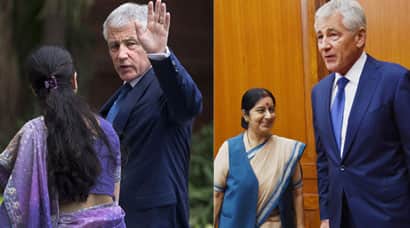