The Centre directed the Jharkhand government to implement its decision immediately.

A note written in the local Gondi language was found on the chest of the body. It reads, “Red salute to the fallen comrades.

Chhattisgarh: Woman jumps into well with two children in Korba, all die

As per preliminary investigation, Girja had left the house with her children while other family members were asleep in the early hours of Thursday, the official said.

Among the selected teachers, three each are from Himachal Pradesh, Punjab, Maharashtra and Telangana. Check the complete list here

As per preliminary information, CRPF jawan Reetesh Ranjan, who was supposed to start his sentry duty at around 4:00 am, opened fire in his barrack on his sleeping colleagues at around 3.25 am.

The CBI registered the case under IPC Section 302 (murder) after the Jharkhand government recommended for a probe by the investigating agency.

Why Naxals continue to hold out in Chhattisgarh

Another Naxal attack, 22 more security personnel killed, more calls for action. Amid this familiar pattern that plays out with alarming frequency in Bastar, The Indian Express on the lessons not learnt, and why Naxals continue to hold out in Chhattisgarh.

Ahead of Chhattisgarh polls, farmers to get instant paddy bonus, petty cases against tribals to be dropped

The move is being read with political overtones as it is a departure from the norm, which is that the bonus is distributed to farmers after the cycle of acquisition is over, after a period of two to three months, which is when the new government would have been in place in Chhattisgarh after the elections.

For 13 years, this man terrorised entire Chhattisgarh from inside a jail

His first registered crime was as a Class X student, under sections 324 (voluntarily causing hurt with weapons), 506B (criminal intimidation), and 294 (obscene acts or songs). 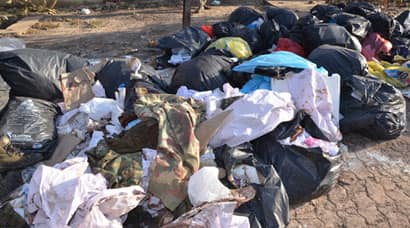 Chhattisgarh Maoist attack: Is this how we treat our martyrs?

At Raipur morgue, how they play politics with remains of CRPF dead.