One-year-old, four others killed as fire breaks out in Lucknow hotel

According to fire department officials, both hotels had fire safety equipment but none of it was used because the staff fled on spotting the Neither of the hotels had No Objection Certificates (NOCs) from the fire department.

Fire breaks out in two UP hotels, five dead

Police suspect a short circuit in the basement started the fire at Hotel SSJ International, located on a congested street near Charbagh railway station.

Charbagh most polluted in Lucknow

Charbagh most polluted in Lucknow 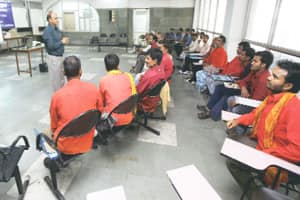 Amidst the routine hustle and bustle of the railway station,the porters,vendors,taxi and auto rickshaw drivers of Lucknows Charbagh railway station have suddenly found a novel dimension to their work.

Lucknow Division defeated Ferozepur Division 5-4 through tie-breaker in the final to bag the top honours in the inter-divisional hockey tournament of Northern Railway (NR) organised at Northern Railway Stadium,Charbagh from November 8 to 10.