Addressing a press conference in Rajkot on the final day of his two-day visit to poll-bound Gujarat, Kejriwal said BJP workers will benefit from all the "guarantees" promised by him to people when his party comes to power in the state.

With Murmu’s victory, BJP in celebratory mode in tribal belt

In Sagbara in Narmada district and Netrang in Bharuch district, traditionally dressed tribal dancers led the rally, with a group also playing music on tribal instruments as the BJP leaders walked with placards congratulating Murmu .

The Reading Room: 8 experts on the best books on the BJP

After their resounding win in the UP elections, political scientists and experts such as Christophe Jaffrelot and Suhas Palshikar on the best books on the Bharatiya Janata Party

Tribals who convert will be denied reservation benefits: Mansukh Vasava

BJP MP Mansukh Vasava also gave a “two-month ultimatum” to the tribals to “reconcile to their ancestral culture” or lose benefits of reservations.

Sakshi Maharaj stirs communal pot in poll-bound UP, BJP says 'not our stand'

BJP MP Sakshi Maharaj was in the city to inaugurate a temple when he made the remarks.

Speaking on the Burdwan blast, she said that the Centre is misusing its power to incite communal violence.

BJP extends support to family of youth stranded in Iraq

Tandon says that while he made several attempts to contact Singh, who is hiding in Basra, Iraq, he could not be contacted.

Aam Aadmi Party is set to create history as it is ahead on four seats as against three by Congress.

BJP set to bag seven out of 10 seats in Haryana, Cong leading only in Rohtak

Congress candidate Deepender Hooda is the only candidate who has maintained leading margin of over 53,000 votes.

Party leaders admit that responsibility of reviving electoral appeal has been solely on the shoulders of its PM candidate, Narendra Modi. Gold traders, jewellers continue their strike for the 28th day

A large number of gold traders and jewellers continued their strike for the 28th day today in protest against the proposed one per cent excise duty on non-silver jewellery. 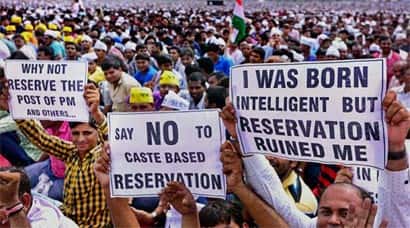 The Patel community on Tuesday (August 25) warned that if they are not made eligible for quota, the BJP government in Gujarat will face consequences in 2017 polls. Sanitation workers protest against Delhi CM Arvind Kejriwal for not paying their wages in New Delhi.