Police say officers were attacked and cars torched as thousands of people gathered in opposition to the clearance of the radical left-wing Köpi-Platz encampment in central Berlin.

Germany was reunited on October 3, 1990, after four decades of Cold War division. While much progress has been made since then, economic and other differences between the west and the less-prosperous east still persist.

Explained: The fall of the Berlin Wall and how it impacted geo-politics

In 1961, the borders between East and West Germany were closed, and the division cost common people their homes, families, jobs and changed their lives irrevocably, creating two separate nations built on different socio-political and economic ideologies, separated by blocks of concrete that were collectively 140 km long.

The Romanian newspapers were silent; the Croatian ones cheered along with everyone. And the Berlin state paper didn't even mention the fall of the Berlin Wall in the first days following November 9, 1989. An analysis.

A wall that fell

Four out of 10 Berliners in a survey said they still didn’t feel at home in a united Berlin.

Fall of the Berlin wall: 25 years later, Germany marks the fall that changed the world

Chancellor Angela Merkel is opening an overhauled museum Sunday at the site — home to one of few surviving sections of the Wall.

Wall in the head

Twenty-five years after the Berlin Wall fell, Germany is a new country, despite persistent divisions.

Before the protests that led to the fall of the Berlin Wall, a group of teenagers dared to challenge the system and paid a hefty price.

At German embassy, the wall fell once again

The event was held at the German Embassy to mark 25 years of the fall of the Berlin Wall, also the national day of German unity.

Making music in place of war

Last week when the Zubin-Mehta led Bavarian State Orchestra staged Ehsaas-e-Kashmir concert in Kashmir,the effort drew praise and criticism in equal measure. As part of the protest,a rival concert,Haqeeqat-e-Kashmir,was also staged on the streets of Srinagar,bringing the spotlight back on music as an effective cultural weapon in zones of conflict. From the Berlin Wall to Tahrir Square,music has,historically,brought people together to make peace not war.

The biggest stories this week — in pictures

From US midterm elections to the 33rd anniversary of the fall of Berlin Wall, here are the top pictures of the week from around the world

Berlin Wall now and then: These photos show city's division during Cold War

This combination of photos shows a section of the Berlin Wall where it divided the city during the Cold War and the same location. 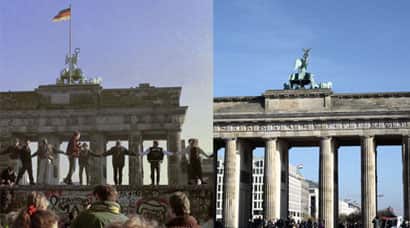 The Berlin Wall: Then and Now

Here's a look at what Berlin Wall was then; and what it is now.