After testing positive for Covid-19, even Matt Renshaw’s umbrella ditched him

Matt Renshaw finally took the field after Travis Head’s removal, but he only managed 5 not out before rain played spoilsport and caused play on day two to finish early.

South Africa slumped to their first test series loss in Australia since 2005/06 with defeat in Melbourne last week.

South Africa are fourth in the WTC standings and would retain a mathematical chance of reaching the final if they can turn the tables at the SCG.

Hazlewood, returning to the side after missing three successive Tests due to a side strain, said he is impressed with Morris' pace.

Leading the three-match series one-nil, Australia reached 45-1 at stumps before a crowd of 64,876.

James Faulkner has been ruled out of the series. Shaun Marsh and Jackson Bird are uncertainties. 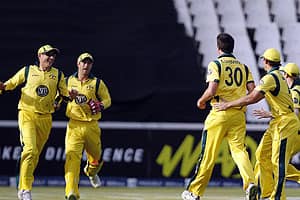 Australia will play two Tests in South Africa,first on November 9 and second from November 17.