We bring you the five best stories of the Indian Express you must read before beginning your day.

Ajantha Mendis scalps four, including the prized wickets of Dhawan and Kohli, to end with figures of 4/60.

What next? Medium pace, perhaps

When a bowler starts relying on so many variations he is bound to lose his consistency, says Maninder Singh.

Aaron's erratic spell of fast bowling, which almost knocked out Rahim, was talking point of first half of game.

Asia Cup: Don't count a win against India as an upset, we have done it before, says Mashrafe Mortaza

Mashrafe Mortaza feels that playing in front of home crowd would be a boost for Bangladesh in Asia Cup.

For India, the build up to the 12th edition of Asia Cup has been quite similar to that of 2012.

Asia Cup: Living on a prayer

Pakistan may be defending champs, but against familiar foes Sri Lanka, there is little to choose between the sides. 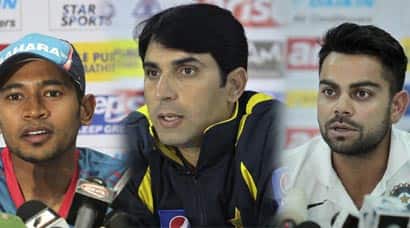 India, Pakistan, Sri Lanka and Afghanistan battle it out for what promises to be an exciting contest for Asian supremacy.