Players given a chance by selectors with an eye on World Cup haven’t really made the opportunity count.

There were no hints of Ashwin's new action in nets during India’s practice session on eve of their Asia Cup opener.

Asia Cup: Don't count a win against India as an upset, we have done it before, says Mashrafe Mortaza

Mashrafe Mortaza feels that playing in front of home crowd would be a boost for Bangladesh in Asia Cup.

For India, the build up to the 12th edition of Asia Cup has been quite similar to that of 2012.

Asia Cup: Exciting for me to improve the record which is already good, says Virat Kohli

Virat Kohli-led India will open their Asia Cup campaign on Wednesday against Bangladesh at Fatullah.

Asia Cup: Can Virat Kohli be aggressive enough as he is not the regular captain?

The enforced break though could very well be a blessing in disguise for Mahendra Singh Dhoni. 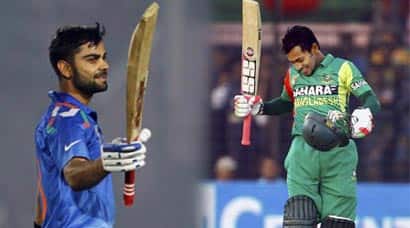