Entertainment news Live Updates: Shah Rukh Khan was seen leaving his home Mannat to bring back Aryan on Saturday. Aryan and his two other co-accused were given bail on Thursday.

Entertainment News Live Updates: Ananya Panday has reached the Narcotics Control Bureau office in Mumbai for the investigation in a drugs case. Meanwhile, Aryan Khan has been sent to judicial custody till October 30 by a special court.

The former head of the National Museum said the report will mostly focus on archaeological findings of the past 15-20 years “since that is considered as scientific evidence”.

The Long Walk: Did the Aryans migrate into India? New genetics study adds to debate

Co-authored by 92 leading scientists, it offers new insights into makeup of the Indian population. Will it settle or again trigger the contentious debate?

The Khans and the Bachchans have always been on good terms with each other and are often seen sharing candid moments together.

Shah Rukh Khan says that contrary to the image of "star kids" in showbiz, his children -- Aryan, Suhana and AbRam -- are "extremely sorted" and "damn good".

Aryan is like my son; I will launch him but don't know when: Karan Johar

Karan Johar said, "Aryan is like my son. So, if anyone has to launch him, it has to be me. But when that will happen, who knows."

My kids are my teacher: Shah Rukh Khan

Superstar Shah Rukh Khan says his children are his teachers as he learns everything from patience to new trends from them.

A prayer meet for the departed soul of Shah Rukh Khan's close aide Subhash K Jain will be attended by Gauri and Aryan. 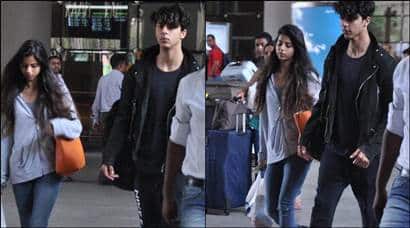 Shah Rukh Khan’s kids Aryan and Suhana's stylish appearance at the airport made headlines and even their superstar father could not resist praising his "cool" children.