Hoof No 122, a mountain artillery mule employed with the Army, was awarded the COAS Commendation Card that the Army’s Gajraj Corps said was an apt recognition of selfless service by unsung warriors.

Army Day is celebrated on January 15 every year and has for the first time been conducted outside the national capital.

Addressing the 75th Army Day event in Bengaluru, Army Chief General Manoj Pande said the northern border region has remained peaceful and steps have been taken for the maintenance of peace through set protocols and existing border mechanisms.

Every year, January 15 is observed as the Army Day to commemorate the occasion when General (later Field Marshal) K M Cariappa took over command of the Indian Army from General Sir Francis Roy Bucher, the last British Commander-in-Chief in 1949.

In a first, Army Day to be held at MEG & Centre in Bengaluru

The parade will commence with a wreath laying ceremony at the MEG War Memorial by the Chief of the Army Staff, General Manoj Pande, to pay homage to the fallen soldiers.

More than 50,000 take part in run organised by Army's Southern Command across 18 locations

In Pune, the run was flagged off by Southern Army Commander Lt Gen AK Singh from the Pune Race Course with over 4,000 participants turning up. The run was held in three categories 12.5, 5 and 4 km categories.

🔴 "On the occasion of 74th Army Day, the officers and soldiers of the Southern Command pledged to uphold the glorious traditions of the Indian Army and to preserve the integrity and security of the nation," read a press statement from the Southern Command.

Everyday is a story: Army officers recall their time at Siachen Glacier

At the highest battlefield in the world, the enemy is not so much an entity holding rifles and guns; it is nature, the isolation, your mind and your body.

Defence Minister Rajnath Singh said the event was organised in Karnataka to pay tribute to the people of the state who laid down their lives for India’s freedom.

India is celebrating the 72nd Army Day today in honour of the soldiers who serve the country selflessly and risk their lives to safeguard the borders.

Army Day is celebrated on January 15 every year to mark the day when (then) Lieutenant General K M Cariappa took over from General Sir Francis Butcher as Commander-in-Chief of India on January 1949. 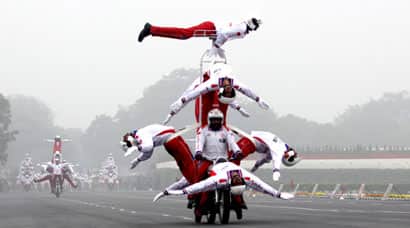 New Delhi, Jan 16 (ANI): Prime Minister Narendra Modi presented certificates to Indian Army officers for their innovative works on the occasion of Army Day. The officers were honoured for their contributions in the areas of communications, counter-militant operations and others. The 'At-Home function' held in New Delhi was attended by President Pranab Mukherjee, Defence Minister Manohar Parrikar, former prime minister Manmohan Singh, Congress president Sonia Gandhi and others. Army Day is observed every year on January 15 to commemorate Field Marshal K. M. Cariappa's taking over as the first Commander-in-Chief of the Indian Army from Sir Francis Butcher, the last British commander, in 1949.

New Delhi, Jan 15 (ANI): Indian Army Chief General Dalbir Singh Suhag, Chief of Naval Staff Admiral Robin K Dhowan and Air Chief Marshal Arup Raha attended the Army Day Parade in the national capital on the occasion of Army Day on Friday. Army Day, which is being observed today, was the day when Lt. General (later Field Marshal) KM Cariappa became the first Indian Commander-in-Chief of the Indian Army post Independence in 1949. This day inspires the troops to continue to enrich the glorious traditions of the Indian Army with their dedication and sacrifice.