Apple iPhone 6 being used by 11-year-old catches fire in the US: Report

An Apple iPhone 6 being used by a 11-year-old girl in California recently caught fire, according to a report. Apple has not publicly commented on the issue.

With the new Apple iPhone Xs, iPhone Xr and iPhone Xs Max just around the corner, let’s take a look at what the earlier generation iPhones are selling at currently

Apple CEO Tim Cook said iPhone users will soon be able to turn off the power management feature on their devices, which can cause some of older devices to slow down in performance

Apple iPhone 6 Plus and iPhone 6s Plus replacement batteries are facing a supply shortage and there is a wait time of nearly two weeks for these. Apple had announced the battery replacement program in December 2017 and it went live in January 2018.

Apple's apology letter for slowing old iPhones: Everything to know about the battery saga

Here's why Apple's latest iOS 8 is worth installing

Google's Android software can't compete with iOS' evolving unity because so many different companies manufacture Android devices, and each adds its own variables.

No shake-up of Indian market as iPhone 6 price too high, say analysts

With Apple entering the big-screen club, though a little late, the company is expected to take...

Check out the Apple iPhone 6 compared with everyday things at Express LOL. 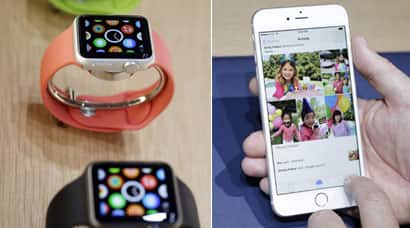