Andhra Pradesh Bhavan in the heart of New Delhi is being split block by block, floor by floor, room by room.

Everything still remains unsettled over a month after Andhra Pradesh and Telangana came apart as two states.

‘Scars of bifurcation will take long to heal’

The governor also said the division had left the rest of AP state with a revenue deficit of over Rs 15,000 crore.

Narasimhan also said the central government should also hasten the process of according Special Category State status to Andhra Pradesh.

As promised, government employees will be given a Special Telangana Increment soon, KCR said.

In new border town, it takes time to sink in

It is a typical lazy Sunday evening in Kurnool town, with nothing to signify the change that will occur on Monday morning.

Andhra splits; KCR to be sworn in at 8:15 am, Naidu a week later as CM of residual state.

Tomorrow, two states will stand where Andhra Pradesh once did.

The new state will be born on June 2, with K Chandrasekhar Rao and N Chandrababu Naidu set to take charge as chief ministers of Telangana and Seemandhra, respectively. 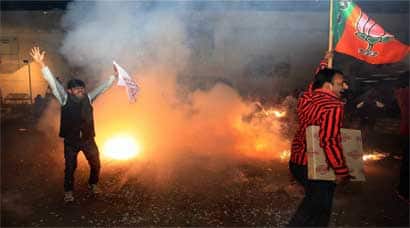