D Raja writes: On the anniversary of the Republic, it is imperative that we protect the vision of the Constitution

On December 6, 2011, Ambedkar and his followers entered the mill premises and erected a makeshift memorial for Dr Ambedkar.

Factions have been fighting to control trust that governs college

Anandraj dismisses college principal who was allegedly against his appointment

Anandraj Ambedkar,grandson of Dr. B R Ambedkar,who is in Surat on 121 birthday anniversary of the father of Indian constitution,on Friday raised the issue of reservation for SC,ST and OBC people of Maharashtra staying in Surat and south Gujarat since last 40 years.

The Republican Sena has decided to organize a bhoomi pujan at Indu Mill on April 14 alleging that the government is delaying the announcement regarding handing over of 12.5 acre of land for an international memorial for Dr B R Ambedkar. 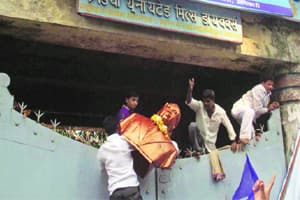 A day after the Bombay High Court said the Mumbai Police hardly needs to be apologetic if it needs to forcibly evict protesters squatting inside the premises of the National Textile Corporation-owned India United Mill near Shivaji Park,members of the Republican Sena said they are willing to pay the market price for the land but will not move until the Central government announces that the entire 12-5-acre mill premises will be declared as kept aside for the expansion of Dr Babasaheb Ambedkars memorial at Chaityabhoomi.