In the recent photo that Dhanush shared, his son Yathra looks like an exact replica of the actor.

Dhanush and Aishwaryaa separate after 18 years of marriage: A timeline of their relationship

Dhanush and Aishwaryaa -- who is the daughter of actor Rajinikanth -- met in the 2000s and got married quickly when they were in their early 20s.

Just like he did after Samantha Ruth Prabhu and Naga Chaitanya's separation, filmmaker Ram Gopal Varma has tweeted in reaction to Dhanush and Aishwaryaa Rajinikanth's announcement that they've split up.

Priyanka Chopra and Aishwaryaa Dhanush are hiding something behind that laughter? See pic

Priyanka Chopra, Aishwaryaa Dhanush are chilling like girlfriends. We never knew about this bonding.

Aishwaryaa R. Dhanush is all set to launch her autobiography titled "Standing On An Apple Box".

Manjula made her debut as a supporting actress in a 1969 film <i>Shanthi Nilayam</i>. 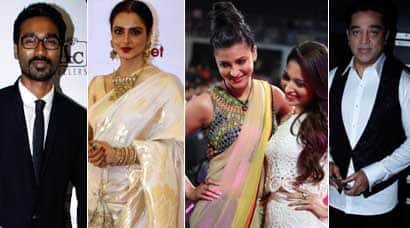 Veteran actress Rekha was a special guest at the recently held Filmfare awards down south. A look at who else made it to the award show.