The flight has now returned to Delhi from Lahore as the flight duty time limitation of the crew came into effect. 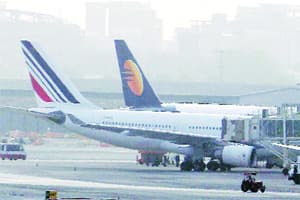 A Paris-bound Air France flight made a full emergency landing at Chhatrapati Shivaji International Airport (CSIA) on Monday a few minutes after take-off.

Ex-IMF chief arrives back in Paris

Strauss-Kahn,62,resigned as the International Monetary Fund's managing director in May.

The Indian Air Force (IAF) scrambled a fighter on Thursday morning to intercept a suspicious aircraft that had entered Indian airspace from Pakistan....