Milind Soman showcased the athleisure collection of his active lifestyle brand, Deivee, at Amazon India Fashion Week 2018 that he has founded in collaboration with Delhi-based designer Nida Mahmood.

The grand finale saw nine designers present a wardrobe for the modern Indian but it was too brief a glimpse.

Younger promising labels led the way on Day Four of AIFW Winter-Festive 2016, heralding the arrival of the future front-runners of fashion.

Suket Dhir, who won the prestigious International Woolmark Prize menswear award this January, found himself at a small party hosted by FDCI President Sunil Sethi at the venue on Wednesday.

The collection which takes inspiration from the culture of Istanbul features luxurious modern cuts with quintessential handcrafted brilliance.

Wendell Rodricks’ recent creation will be part of an exhibition at The Museum at Fashion Institute of Technology in New York.

Each piece told the story of this modern-day princess — her castle is embroidered on her skirt and the metallic belt is cut out like her palatial home.

Amazon India Fashion Week: Taking the Bindi for a Walk

Amit Aggarwal presented his first autumn-winter collection on the ramp under his prêt label, AM.IT. Bollywood actor Malaika Arora Khan proved to be the perfect muse when she walked the ramp for Madira Wirk at the ongoing Amazon India Fashion Week Autumn-Winter 2016. Day three of Amazon India Fashion Week Autumn-Winter 2016 danced to tribal tunes with designers Anupama Dayal and Reynu Tandon showcasing their collections inspired by the secrets of the tribes. 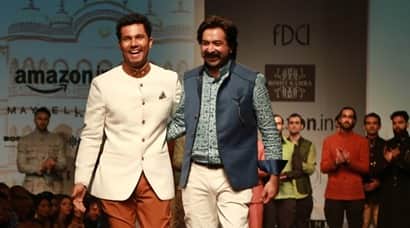 Bollywood actor Randeep Hooda brought a regal wave at the ramp of ongoing Amazon India Fashion Week (AIFW) Autumn-Winter 2016 as he turned into a maharja with a contemporary twist for designer Rohit Kamra. Malini Ramani's collection was inspired by Supernova, the brightest star in the galaxy, and she said she dedicates the line to women to shine from within. Using gold all the way, and yet maintaining a subtlety is not every designer's cup of tea. But Rajesh Pratap Singh hit the bull's eye with his latest line 'The Gold Rush' at an ongoing fashion gala. Shruti Sancheti presented Constantinople, which takes inspiration from the culture of Istanbul and celebrates the neo-ethnic diversity. 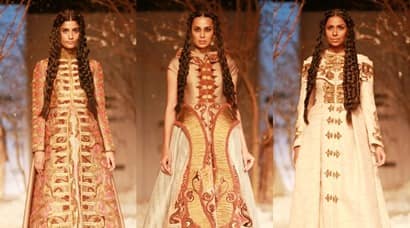 His love for silk continues to mesmerise fashionistas and Samant Chauhan's "Silk Route" journey showcased at the ongoing fashion week magnificently reflected the designer's journey to route along Nepal, Tibet and China. It was a story of Earth and nature that fashion designer Anita Dongre opted to narrate at an ongoing Amazon India Fashion Week.