Singh, who spoke later, said that there is “trivialisation of debate on corruption and understanding complex public policy”.

Rahul said the coming elections are a turning point in the country's journey and the Congress should transform itself by catering to the aspirations of the common man.

But Digvijaya not in favour of Cong naming candidate.

Digvijaya Singh on Friday said there was no need to declare a PM pick before elections.

Decks cleared for Rahul,likely to be named PM candidate at Jan 17 meet

The AICC session,sources said,could set the stage for the big announcement. 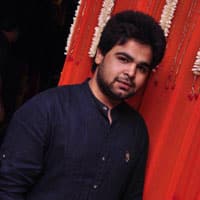 Prime Minister Manmohan Singhs plan to hold a press conference early next month has created a buzz in the ruling Congress.

Rahul feels there should be no disruptive changes before the 2014 elections.

Cong calls AICC meet on Jan 17,all eyes on Rahul

In an AICC session in Jaipur last January,Rahul was elevated to party vice-president.

Enough of self praise,talk about scams: Naidu to Cong

He said the Congress is interested in self praise,running from responsibility and misleading the common man.

Only Congress can unite the 'two Hindustans': Rahul

'There are two Hindustans -- one is growing very fast and the other is for the poor (which is in crisis).... We have to connect and unite the two.'