AIB comedian Tanmay Bhat issues a statement on Snapchat, but we suspect there may be more on it soon.

He courted trouble post his stint in AIB Roast last year, but Ranveer Singh doesn’t repent being a part of the controversial show.

In February this year, social activist Santosh Daundkar filed a complaint with the Chief Metropolitan Magistrate of Girgaon court claiming that the show was ‘pre-scripted’ and ‘vulgar’.

Advocate Virednra Kumar has demanded action against the 14 artistes under sections 292 (sale etc of obscene books), 294 (obscene acts and songs) and 120B (punishment of criminal conspiracy) of the IPC.

Aamir Khan defends his reaction on AIB Roast, says 'you can't go around attacking anyone you feel like'

Aamir Khan has finally broken his silence and explained the reasons behind his "double standard", as called by others, reaction on AIB.

AIB has cancelled its upcoming live tour owing to the controversy generated around its show 'AIB Knockout' last month.

OML, is alleged to have submitted the script of a month-old event called ‘The Royal Turds 2014’.

The latest to join the AIB Roast haters' list is filmmaker Sanjay Leela Bhansali who apparently is quite miffed with his protege Ranveer Singh.

Rakhi Sawant feels that Karan Johar and Ranveer Singh, who are 'very good friends' of hers, have been "chitted".

Karan Johar has apparently decided to shelve the idea of producing a sex comedy written by Sonam Nair. 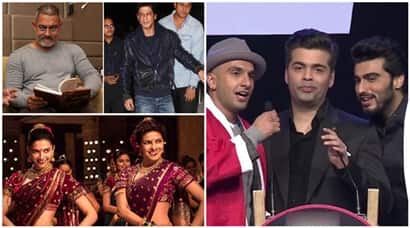 Controversially speaking, Bollywood as always delivered blockbuster hits this year with many top stars getting mired in controversies that they could have done without. We take a look at the top controversies including the AIB roast, Shah Rukh Khan and Aamir Khan on intolerance and protests against 'Bajirao Mastani' that took Bollywood by storm in 2015.